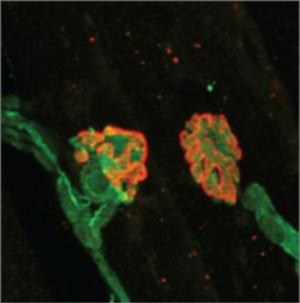 The British astrophysicist Stephen Hawking is likely to be the world’s most famous person living with amyotrophic lateral sclerosis (ALS), also known as Lou Gehrig’s disease. ALS is a progressive disease affecting motor neurons, nerve cells that control muscle function, and nearly always leads to death. Researchers at the Institute of Molecular Biotechnology of the Austrian Academy of Sciences (IMBA) in Vienna have now identified a completely new mechanism in the onset of motor neuron diseases. Their findings could be the basis for future treatments for these presently incurable diseases.

The IMBA scientists, working with an international team of researchers under the leadership of Josef Penninger and Javier Martinez, discovered a completely new fundamental mechanism that triggers the death of motor neurons. Motor neurons are nerve cells responsible for stimulating muscles. The loss of these motor neurons in mice with a genetic mutation in a gene named CLP11 leads to severe and progressive muscular paralysis and, in some cases, to death.

“We’ve been working on resolving the function of the CLP1 gene in a living organism for a long time. To do that, we developed model mice in which the function of CLP1 was genetically inactivated. To our utter surprise we discovered that deactivating CLP1 increases the sensitivity of cell die when exposed to oxidative stress2. That leads to enhanced activity of the p53 protein3 and then to the permanent destruction of motor neurons,” says Toshikatsu Hanada, a postdoctoral researcher working in the lab of Josef Penninger and first author of the study along with Stefan Weitzer.

Stephen Hawking — a most renowned patient

Motor neuron diseases (MNDs), such as amyotrophic lateral sclerosis (ALS) and spinal muscular atrophy (SMA), are chronic disorders of the neuromuscular system. These diseases are caused by damage in the motor nerve cells in the brain and spinal cord, and the nerves can no longer stimulate motion in the muscles. The primary symptoms are muscular weakness, muscular dystrophy, and problems swallowing or speaking. Stephen Hawking was diagnosed with ALS 50 years ago. But not all ALS patients live so long with the disease: so far there are no treatments for ALS. Nearly all ALS patients die of paralysis of respiratory muscles within a few years.

Javier Martinez, an IMBA team leader and co-author of the study, is a specialist in the field of ribonucleic acid (RNA) research. His research group had discovered the CLP1 gene in an earlier study, published in Nature in 2007. Until now, the exact essential function of CLP1 in RNA biology was unclear. “By deactivating CLP1, we have discovered a previously unknown new species of RNA,” says Javier Martinez about the scientific relevance of the work. “The accumulation of this RNA is a consequence of increased oxidative stress in the cell. We see this as one of the triggers for the loss of motor neurons that occurs in ALS and other neuromuscular diseases. Thus our findings describe a completely new mechanism of motor neuron diseases.”

Josef Penninger, scientific director at the IMBA and last-author of the study, is excited about the researchers’ findings: “This surprising discovery of a role of CLP1 in the onset of motor neuron diseases is an entirely new principle in how RNA talks to oxidative stress. Nearly all genetic mutations found in ALS patients affect either RNA metabolism or oxidative stress, suggesting a possibly unifying principle for these diseases. Our work may have revealed the ‘missing link’ in how these two biological systems communicate and trigger incurable diseases like ALS.”

Stefan Weitzer sees tremendous potential for these findings: “We’ve discovered a new mechanism that leads to the death of motor neurons. If this holds true for other neuronal disease, our results could be one day used to drive the development of treatments for previously incurable diseases. In our work we also describe how the p53 protein regulates the loss of motor neurons. Removing p53 saves mice with CLP1 mutations from certain death.” If scientists are successful in applying these findings to people, the researchers may have discovered a treatment approach to cure ALS and similar diseases. The authors, however, caution that more studies will be needed to translate their findings to human medicine.

This study was performed in collaboration with research groups from the Medical Universities of Vienna and Innsbruck, the University Medical Center at Hamburg-Eppendorf in Germany, the Harvard Medical School, the Harvard Stem Cell Institute, the Boston Children’s and Massachusetts General Hospitals, the Keio University School of Medicine in Tokyo, Oita University in Japan, and the Weizmann Institute of Science in Rehovot in Israel.

2) Oxidative stress: causes damage to cells and the genome, and is involved in the ageing process. The normal repair and detoxification function of the cells is overburdened.

3) p53: a protein that is mutated in many types of cancer cells. It plays a role in inhibiting the cell cycle and can trigger cell death.

The above story is reprinted from materials provided byInstitute of Molecular Biotechnology.

Note: Materials may be edited for content and length. For further information, please contact the source cited above.

The Origins And Future Of ALS: A Profound View